Cars, vans and lorries could be banned from driving through Victoria Park during the day under proposals for a £50m cycle route linking Hackney and the Isle of Dogs.

More than two-thirds of the 4.6-mile “cycleway” would be segregated, including on Burdett Road and West India Dock Road, under the Transport for London proposals out to consultation today.

Grove Road would be open to bikes, buses and taxis only between 7am-7pm as it passes through Victoria Park. Burdett Road would become 20mph. 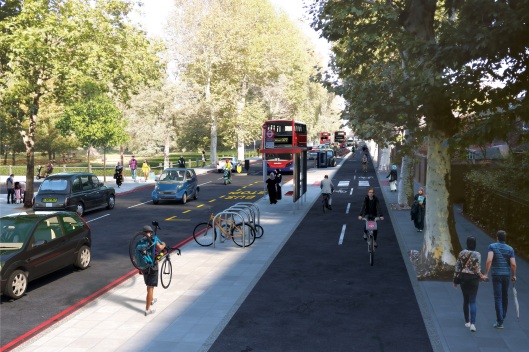 The route is the first to be devised under a new TfL formula that estimates how many more people it might encourage to cycle, and which ensures segregation is used in areas of higher road danger.

The “strategic cycling analysis” used data to identify 25 areas with the best potential for getting more people to cycle.

Hackney has more commuter cyclists than any other London borough.

It would link with Quietway 2 in Hackney, cycle superhighway 2 in Mile End and Cycle Superhighway 3 at Westferry. (Oops, sorry, Will Norman, I forgot I shouldn’t call them superhighways or Quietways…)

See here for a detailed PDF of the route:

Cycleway between Hackney and the Isle of Dogs-Overview-Draft

A later consultation will be held to determine the route to the Thames, where it could link with the Greenwich foot tunnel and the proposed bridge between Canary Wharf and Rotherhithe.

It is the latest TfL cycling consultation, coming on the back of its £42m proposals for a Notting Hill to Wood Lane route announced last week. The Wood Lane consultation closes on June 16.

TfL said construction work on the former CS9 route between Brentford and Olympia, and the former CS4 linking Tower Bridge Road and Greenwich, was “set to begin later this year”.

Simon Munk, infrastructure campaigner at the London Cycling Campaign, said: “Today, the Mayor takes another step to fulfilling his pledge to the LCC to triple the mileage of protected space on main roads.

“This route will mean far more people will be able to cycle between Hackney, Canary Wharf and beyond via the planned bridge to Rotherhithe, connecting from Walthamstow to Woolwich.”