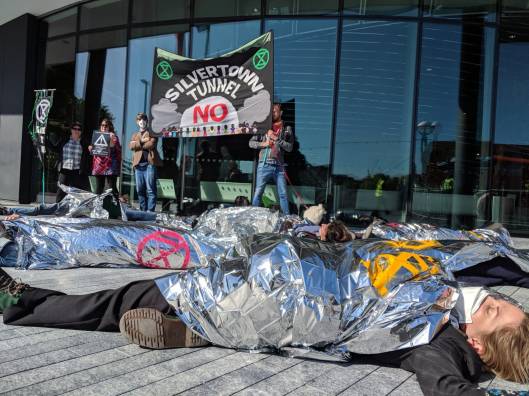 Parents and eco-protesters staged a “die in” outside City Hall (above, on May 14) as they pleaded with Sadiq Khan to drop plans for a “polluting” £1bn road tunnel under the Thames.

The Stop The Silvertown Tunnel Coalition has been formed by Greenwich residents and Extinction Rebellion activists in a bid to force the Mayor to rethink the Silvertown tunnel.

They describe as a “very expensive mistake” and say it runs counter to his efforts to reduce toxic vehicle emissions via the ultra low emission zone (Ulez). A letter signed by 250 people, including 16 school teachers, was handed to City Hall. 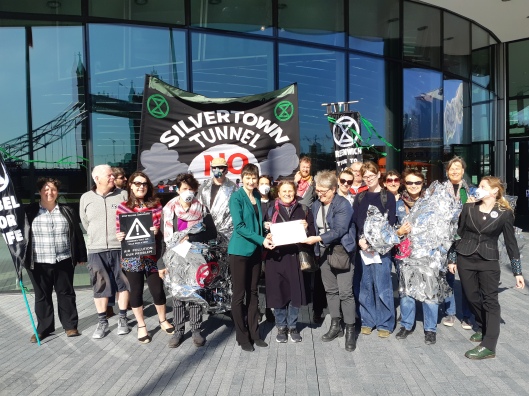 Transport for London is due to start construction of the one-mile twin tunnel, which will ease congestion at the Blackwall tunnel by creating a new crossing to the east of the O2 arena, by the end of the year.

When completed by 2024, the tunnel will link the A102 on the North Greenwich Pensula with the A1020 in Silvertown. Vehicles will have to pay a toll – and a new toll will also be levied on the Blackwall tunnel.

TfL says the Silvertown tunnel will “help to address the lack of cross-river connections in east London and reduce the environmental impact of traffic congestion” from vehicles queuing to use the Blackwall tunnel.

Campaigner Karen Janody said: “The Mayor has declared a climate emergency, and he has been vocal about the need to clean up London’s polluted air. To halt increasing respiratory illnesses and climate change we have to reduce motor traffic in London by 80 per cent by 2030.”

Victoria Rance, a mother of three, said: “We believe that the Mayor really cares about children’s developing lungs and brains, so we want him taking action to reduce HGV traffic. But this scheme encourages it.

“This new tunnel is deliberately designed to allow larger, heavier, more polluting HGVs to re-route through South East London, near where children live, play and go to school.”

Permission to build the tunnel was granted by Transport Secretary Chris Grayling last year. It will be built by TfL using a PFI scheme, with the cost repaid via toll charges. A peak hours levy of £3 (and £1 off peak) has previously been mooted.

City Hall says that because the tunnel would be funded by tolls, this money would not be available for other projects.

The tunnel was first proposed by Boris Johnson in 2011. Last year the mayor of Newham, Rokhsana Fiaz, called for it to be scrapped because of fears it would worsen air quality.

A spokesman for Mr Khan said: “When he became Mayor, Sadiq sent back the plans for Silvertown tunnel to make sure that any environmental impact is mitigated.

“The proposed user charges at both the Blackwall and Silvertown crossings means the scheme does not lead to an overall increase in traffic.”